When most people get married, they assume they’ll be wearing their wedding rings all the time. It’s a romantic notion, but one that can get you in trouble, despite the best intentions.

Now, we’re not suggesting you take off your band to feign single-dom (because what happens in Vegas rarely stays in Vegas), we want to point out the scenarios where you’re at highest risk of losing your ring when you DO wear it. No one wants to come home from a boating trip to tell their honey the bad news that their precious ring is gone - and we may be biased about how you should protect your ring, but whatever way you secure it - be sure to have a plan for these top three risky situations.

We surveyed over 250 married men across the US - which is how we confirmed that 4 out of 10 married men will lose their ring at least once - to get the scoop. Of reasons that 40% of the group lost or misplaced their bands, three rose to the top of the ‘risky’ list.

#1: Guys Lose their Rings at Work in Industrial or Physical Labor Settings

Across all demographics, the top place that gents misplaced or outright lost their wedding bands was earning their pay doing physical or industrial work. That makes sense because we spend more of our waking lives doing work than pretty much anything else and people who labor in roles that require jewelry to be removed for safety reasons are placing their rings at risk. In fact, that’s exactly how John Newbold-Knipp, co-founder of RingSafe, misplaced his ring.

If your trade demands you take off your ring to protect your fingers, the ring or your life, it’s important to figure out a solution that works for you.

#2: Guys Lose their Rings Around the House During ‘Honey-Dos’

The irony of the second biggest reason guys lose their rings isn’t lost on this wife - it’s possible that my husband may read this post and use it as leverage to scuttle a few tasks. All kidding aside, it’s easy to understand why Honey-Dos that involve being a family handy-man can put your ring at risk.

How often do you do the same odd-job twice? Rarely, that’s why they are ‘odd’ jobs. The range of things could include raking the leaves to putting up shelves to bringing down ornaments from the attic. Each of these might happen once a quarter to once a year and if you aren’t in the habit of taking your ring off, you probably won’t have a ‘standard’ place to put it at times like these. Others might be more regular, like washing the dishes.

In all cases, if you are about to do a chore that’s better done ring-free, ensure that you’ve secured your ring somewhere safe, far from harm’s way that you won’t forget it.

We were surprised to see that watersports was only third on the risky list because most friends who have lost theirs told stories of either sporting fouls or honeymoon beach trips gone sour.

In our survey group, about 10% of folks who lost their ring, lost it doing some sort of watersport. Nearly every married surfer we spoke with had a ring loss story - and many gave up on wearing their rings, much to their wives’ chagrin. The other common story is a beach or boat trip shortly after getting married when a ring hasn’t been perfectly sized and the groom isn’t used to wearing it all the time. 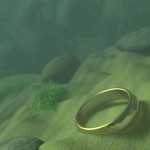 If you live near the water or plan a holiday where you’ll be in the water a lot - it’s smart to come up with a plan for what you’ll do with that band. If you surf or boat a lot, leaving your ring in the car or getting a floating RingSafe (product in the works) are smart choices. If it’s your honeymoon, your bride may not take kindly to you putting your rings in the safe, so whether it’s a RingSafe or another solution, talk about it before you go. We don’t want anyone to have their first married argument be about losing their wedding band.

How NOT to Lose Your Wedding Band - Anywhere

Those are the top three ways guys reported losing their rings. Other high scorers were general sporting and gym activity as well as work in the medical, dental and spa/beauty professions.

It doesn’t matter how you might lose your ring - all that matters is NOT losing your ring - because no one wants to have that conversation. Naturally, we’d love it if you secure your ring with a RingSafe, but if that’s not an option, consider a few other tips: always put your ring away in the same place, ensure this place is safe and secure, make a reminder for yourself on your phone’s alarm function about where you put your ring and enlist the help of your partner to help you remember.

Tell us your story about how and where you lost your ring to be entered to win one of three complimentary RingSafes when we launch in late September 2014!